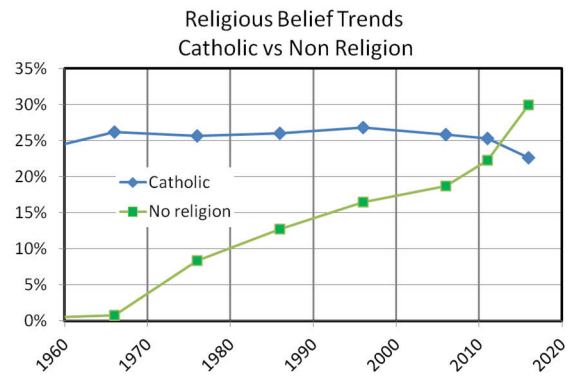 The first release of data from the 2016 Census reveals that the non-religious now outnumber every religious creed in Australia. The best estimate of the population with “no religion” is now 33%, using a proportional allocation of those “not stated”. The new landscape bodes well for enlightened social reform measures such as marriage equality, equal opportunities in education, and removal of religious funding privileges.

The new figures confirm a continuing growth in the percentage of the Australian population who do not identify with any religion. Census data in the first half of the twentieth century showed that non-religious people represented less than one percent of our population. But since the 1970s the proportion of those declaring they have “no religion” has steadily grown to such an extent that they now represent the single largest group, identified at 29.9%, ahead of Catholics at 22.6% and Anglicans at 13.3%.
Further down the list are Uniting Church 3.7%, Presbyterian 2.3%, and many others. Total non-Christian religions account for only 8.2%.
Comparing the Census data over 40 years from 1976 to 2016 shows the total Christian share of the population falling from 78.6% to 52.1%. Within that group, Catholics have decreased their share from 25.7% to 22.6%, and the heaviest decline has been with Anglicans falling from 27.7% to 13.3%. The fallout has not led to those taking up other religions, but instead finds people leaving religion altogether. The non-religious group has grown from 8.3% in 1976 to 29.9% in 2016.
This trend follows that in similar Western countries – New Zealand was 41.9% non-religious in 2013, and Canada had 23.9% in 2011.

Despite attracting a lot of media attention, certain minority groups have grown but remain a surprisingly small part of our population – Islam has grown from 0.3% in 1976 to only 2.6% of our population. “Hillsong” and other Pentecostal Churches have grown from 0.3% in 1976 to 1.1% in 2016.
The non-religious group now finds itself the largest single group in the country, and yet it seems radically under-represented in the political sphere. At the 2015 Religious Freedom Roundtable run by the Human Rights Commission, 4 non-religious delegates were invited out of 25 (16%), whereas a fair proportion would have been 6.
Our federal parliament (both major parties) includes far more politicians with strong religious biases (particularly Catholics) than the general population, as identified by many academics and journalists . This has resulted in decades of foot-dragging on issues such as marriage equality, abortion, and dying with dignity. The enlightened world is laughing at Australia. On issues with a big upside and no downside, reason should prevail over fruitless debate.
Unjustified non-charitable tax privileges and grants to religious organisations cost the taxpayer around $31 billion per annum, according to the Secular Party. Imagine what that could achieve for schools and hospitals.
The new Census data heralds a major shift in the political landscape and the relatively new “Secular Party” seeks to address this major political gap.

Party President John Perkins said “The Secular Party stands for the separation of Church and State. Because the Liberal and Labor parties are restricted by their fear of religious voter backlash they are both hamstrung in dealing with straightforward solutions wanted by the majority of ordinary Australians. Because we do not see the churches views as privileged we will not be intimidated. We can make marriage equality real. We can introduce assisted suicide under the conditions which have proved successful in enlightened countries. We can eliminate funding to all religious schools. As champions of human rights, we want women, minorities and the LGBTI community to be free of discrimination and the dictates of archaic superstition.”
By appealing to this large non-religious component that the Census has identified in the Australian community, the Secular Party will motivate voters who are bored with the lack of action on important social reforms. It has a full suite of positions on broad government policies which are not conflicted by old religious ties, and instead are based on humanist values, evidence and informed debate.

The Party intends to build support over the coming years to be ready at the next elections in 2018/9 as a viable alternative to the major parties. Dr Perkins said “We seek the support of all those who feel disenfranchised by the current stale political parties. If you want action on real reforms balanced with a sensible economic agenda then look up and support the Secular Party at www.secular.org.au or on Facebook.

A PDF version of the media release can be downloaded here.